High Availability (HA) for Cloud Databases means that Cloud Databases users can run their critical production workloads without worrying about a database becoming unavailable due to the failure of a database component. It improves the reliability of running a database in the cloud environment by minimizing downtime and ensuring that the application is never down for more than a few seconds in the event of a failure.

HA for Cloud Databases has the following use cases:

Note: Your application must be able to direct the reads and writes to a specific port.

HA for Cloud Databases relies on Master High Availability (MHA) for MySQL functionality for source monitoring, automatic failover, and replica promotion. The replication setup is semi-synchronous and involves one source and one or two replicas. MySQL and Percona implementations are set up by using global transaction identifiers (GTIDs). To improve the robustness of the system, the source and the replicas are each provisioned on separate hosts.

An HAProxy load balancer controls a single access point (IP/hostname) for the HA group and uses different ports for the read-write pool (port 3306) and the read-only pool (port 3307). The load balancer with HAProxy is highly available itself, with two nodes managed by Keepalived. It is accessed by using a virtual IP (VIP). Figure 1 provides an overview of a Cloud Databases HA setup. 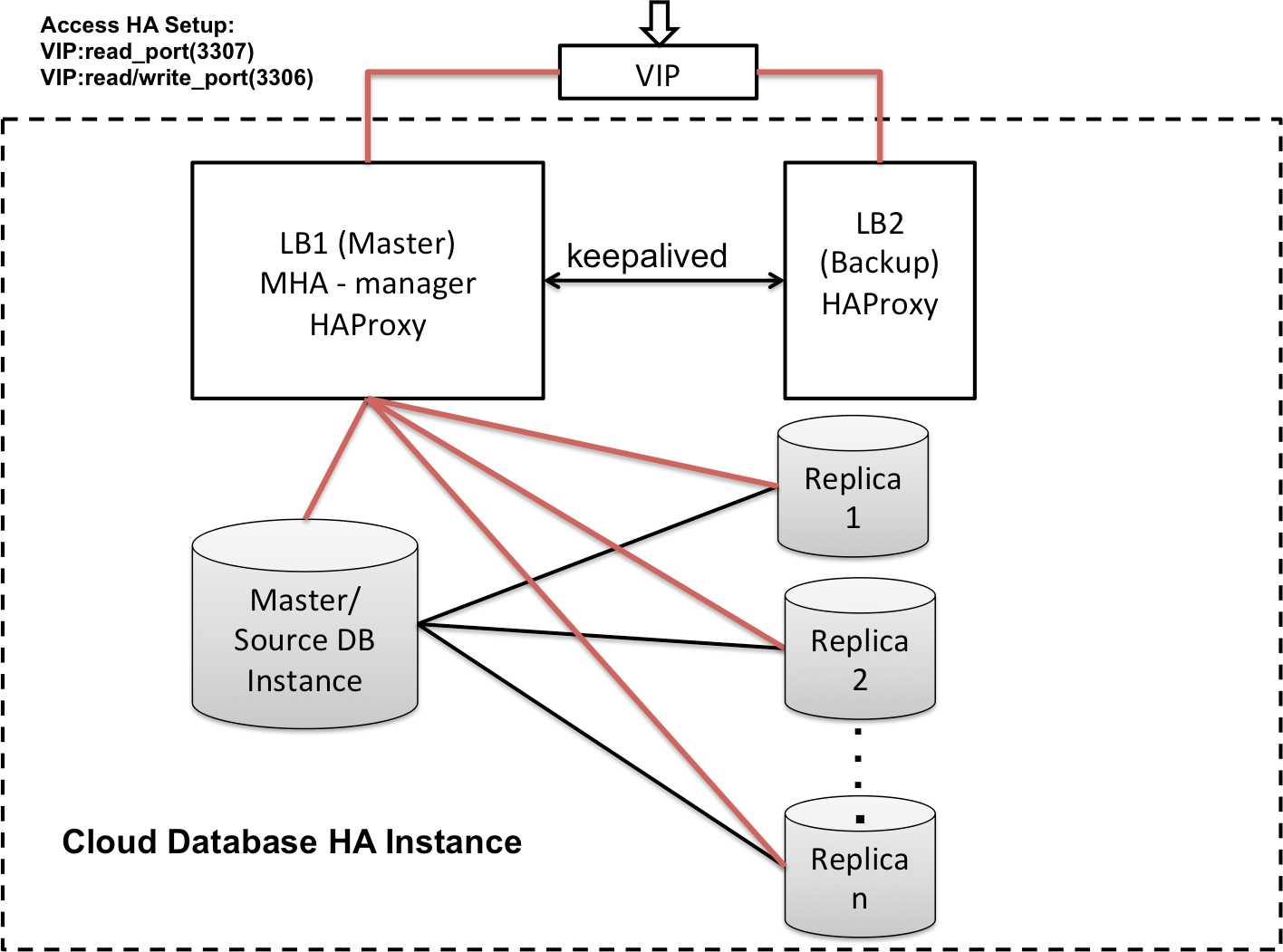 The MHA Manager lives within the source HAProxy node and monitors the source database instance. If the source database instance becomes unavailable, MHA initiates failover to the most up-to-date replica instance. All of the other replica instances automatically reattach themselves to the new source. If some of the replicas do not receive the latest relay log events, MHA automatically identifies differential relay log events from the latest replica and applies them to the other replicas. MHA also triggers a script that switches the new source out of the read-only pool and updates the write pool. The total process takes approximately 10 to 30 seconds.

Get started with HA for Cloud Databases

You can create new HA instance groups and convert from a replica set to an HA group by using the Cloud Control Panel and the API. For more information about HA-related API calls, see the Cloud Databases Developer Guide.

The following list presents information to keep in mind when using HA for Cloud Databases:

Warning: Automatically adding a new replica restarts the MHA Manager service and the HAproxy service on the load balancer nodes. Any API actions that are issued to the cluster during the replica add part of the process might not succeed.

We recommend that you take the following steps:

HA for Cloud Databases has the following limitations: